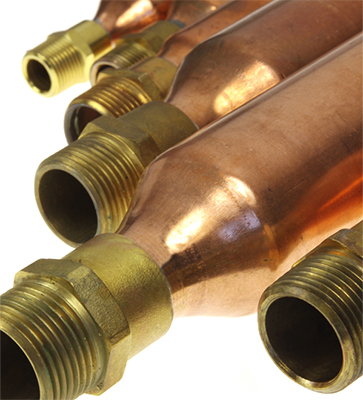 If you have banging or thumping pipes, you may have an issue called Water Hammer - read on to find out what damage this can cause, and how to stop the problem...

What is Water Hammer?

The term water hammer refers to the noises and pressure surges associated with movement of water through the plumbing system when the flowing water comes to a sudden and complete stop.

When a valve or tap is shut off, the water is stopped abruptly - the momentum in the water then turns into a pressure increase within the pipe, due to the fact that water cannot be compressed. This pressure wave results in the banging noise that characterises water hammer.

Can Water Hammer cause damage?

Aside from the annoyance of having thumps, bangs and crashes occuring in your pipes, water hammer can cause actual damage too.

How can you control Water Hammer?

To avoid the irritation and potential damage caused by a water hammer, there is a simple solution. The most effective way to control a water hammer is to install a Water Hammer Arrester.

Arresters use a compressible cushion of air or gas, which is separated from the water. When a valve closes, the moving column of water travels into the arrester and compresses the gas/air, reducing the momentum of the water and preventing the water hammer occurring.

Unlike having a simple air chamber or simple capped pipe, a water hammer arrester doesn't become waterlogged over time - the fact that the gas or air is kept permanently separate means that it doesn't get absorbed by the water, a risk that can leave air chambers and capped pipes ineffective.

Masefield Beta offer a range of Sioux Chief Water Hammer Arresters - all of which are guaranteed to control water hammer for the lifetime of the plumbing system.

Find out more about our water hammer arresters, or contact us if you have more questions.